All ETERNO preserves are made using our proprietary recipes. Despite the fact that similar products (such as lemons in rum) have recently emerged on the market, we are the creators of their original taste. Go to the source! The original has the best taste.

ETERNO's HISTORY - a collection of flavours and memories

“I wish I could have seen that famous confectionery at Nevsky Prospect...”

It all started with several glass jars and a book:“ L'art de conserver les substances animales et végétales” (“The art of preserving animal and vegetable substances”) purchased by Matylda Aubry, our great-great-grandmother. This is when the first lemons were created. Matylda served them together with tea at her confectionery at Nevsky Prospect. They were so delicious that cooks from the nearby Grand Hotel used to come to eat them.

At the beginning of the 20th century the fame of our family's preserves reached China! Helena, Matilda's youngest daughter, went there. While her husband, Wieńczysław Kołłątaj, was actively involved in the life of the local Polish community, she was doing what she did best—making preserves. Despite Helena going back to Saint Petersburg in 1915 and then going to Vilnius, her stay in China was a unique opportunity for her to learn new flavours. Not many have heard of Chinese herbs and hibiscus at the time.

“My hands were struck with a ladle time and time again”

After the Second World War the tradition of making preserves was passed again to the youngest daughter—Eugenia. However, grandma Helena lived with her daughter and took care of the kitchen and grandchildren until she passed away. Also, she always cared for the pantry to be full of preserves. In 1967 Eugenia and her husband, Walerian, established a silo in Milanówek. They cultivated cucumbers and cabbage on their own. Once the products were potted, they were exported to Sweden and Germany. Their son, Tadeusz, paid much attention to the whole process. Grandma Helena believed that he would continue their family tradition.

"I persuaded my daughter in law to share the taste of lemons with others".

The kitchen at our house was the main place of meetings and cooking was passion which connected both families. Integration was the pleasure while keeping the cups of good tea in our hands. We couldn't imagine the cup of tea without lemons, which I used to prepare for friends from ages. After a while their opinion turned out to be an impulse to produce delicacy on a larger scale. We wanted everybody to know the taste of lemons, so we started setting up the company. We already knew that this was just the beginning. 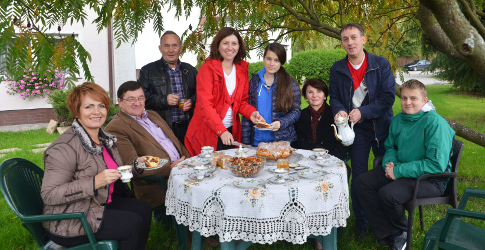 “We pulled out old, tried and tested recipes and started working”

The first products on which Eterno's logo appeared were lemons with rum. Why did we choose such a name? Eterno means eternal. Since Matylda Aubry's recipes managed to endure so long, there is a good chance that their taste will continue to please the palates of subsequent generations. With time, other homemade preserves joined the lemons. They include both preserves the recipes for which have been saved in family notebooks, as well as entirely new recipes of my father, Tadeusz. As many as 60 were created during the 10 years of the company's operation. “Doceń Polskie” (2011), “Jakość roku 2012” and “Dobry Produkt — wybór ekspertów 2015” are only several of certificates awarded to our preserves.

“It must be healthy and tasty”

Our preserves never contained any artificial colourings or preservatives. However, in order to obtain an ECO certificate one must prove that the preserves have been made using solely certified products and conventional methods. We decided that we fulfil the requirement. In March 2016 we have finished the ECO certification process for the first Eterno jars. The first BIO product are lemons in syrup. This is the most recognised jar by Eterno, hence it deserves special treatment. Other ecological preserves are ECO Red Oranges and ECO Limes in syrup. It is certain that with time there will be more ECO preserves.